My love of Facial Exercise comes from a personal place.

Back in 2006 I had trouble sleeping one night. I was approaching 50 and starting to look and feel old and it was keeping me awake. I finally dragged myself out of bed in the middle of the night and turned on the TV in hopes it would make me sleepy. On came CNN and in a few minutes a very short story about facial yoga. The commentator was talking about claims that facial yoga could help to make you look younger. Right. I watched a little more news, finally felt sleepy, and went back to bed.

The next morning, I started thinking about that facial yoga stuff, so I Googled it. Not much info at all, but I eventually found a site that offered some exercises. So, I ordered them. As instructed, I practiced daily. I thought they were interesting, so I created a few variations. After a few weeks I was washing my face when I became alarmed. Something felt different. I touched my face again and I realized that my face felt soft! Wow, I was really amazed. I didn’t really look any different, but I kept up with my routine anyway.

A few more weeks went by when I entered a local bank in my neighborhood. I was standing in line when the bank manager who opened my account a few months back passed by. She said hello and we started to chat. After a few minutes she interrupted and said, “I’m sorry, but I just have to tell you, you look vibrant!” LOL. I said, “I’m practicing these crazy facial exercises and they must be working!” And so they were!

I was so impressed I soon found an instructor with a certification program. I was soon certified to teach facial toning exercises! I lived in Atlanta during this time, so I started calling yoga studios and teaching classes. Word spread, my clientele grew. I began to see what was working and what wasn’t, so I adjusted the exercises as needed. My exercise list grew. Some of my students were telling me that people were telling them they looked as though they had a face lift! One day a student mentioned to me that they would like something they could use at home to make it easier to remember the exercises. So, I created a DVD. Then I created the instructional exercise worksheets. I now had products, so I created a website. To my great surprise, the products started to sell…all over the world!

Soon, I was getting mentioned on all the blogs. Many were saying Happy Face Yoga was the best program out there! My reputation grew. Soon, I was featured on CNN. Woman’s World Magazine did a 2-page centerfold article. Lots of publicity generated more interviews. And during these interviews I was ALWAYS asked about the plastic surgeons who claimed the exercises didn’t work because they had never been proven. So, I wrote a five-page essay about the need for a facial exercise study and sent that paper out to hundreds of doctors, hospitals and universities. It took several years, but one day I received a call from Dr. Alam, the Head of Dermatology at Northwestern University. He wanted to know if I was interested in coming to Chicago to teach the study! Finally!

So, I did that study and the results were amazing. Even the doctors couldn’t believe it! It took a few more years, but finally on Jan 3rd, 2018 JAMA Dermatology published our study in their medical journal! Northwestern University sent out a press release that morning, and my life was changed forever. I became the world’s first and only person (along with Northwestern) to prove that facial exercises do help to bring a youthful look to the face! I received worldwide publicity and I’m now considered the world’s foremost authority on facial exercise.

And with good reason. Not only did the participants of the study look 3 years younger on average, but I’ve seen such great results from the thousands of students and clients I have taught. And I receive emails of thanks all the time from people all over the world who have purchased my program and practiced daily. I receive comments all the time like “Now younger guys are hitting on me!” and “My friend thought I had a facelift!”. People all over the world who are practicing my Happy Face Yoga facial exercises are truly seeing wonderful and life-changing results.

And as for myself, I’ve been sleeping pretty well lately!

Gary is available for speaking engagements. Book Gary for your next event. 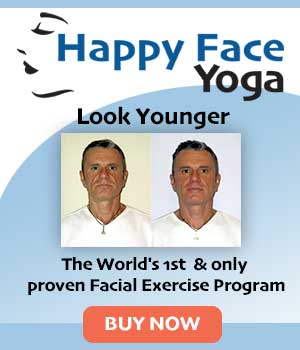